10 most famous Turkish foods and where to eat them in Istanbul: 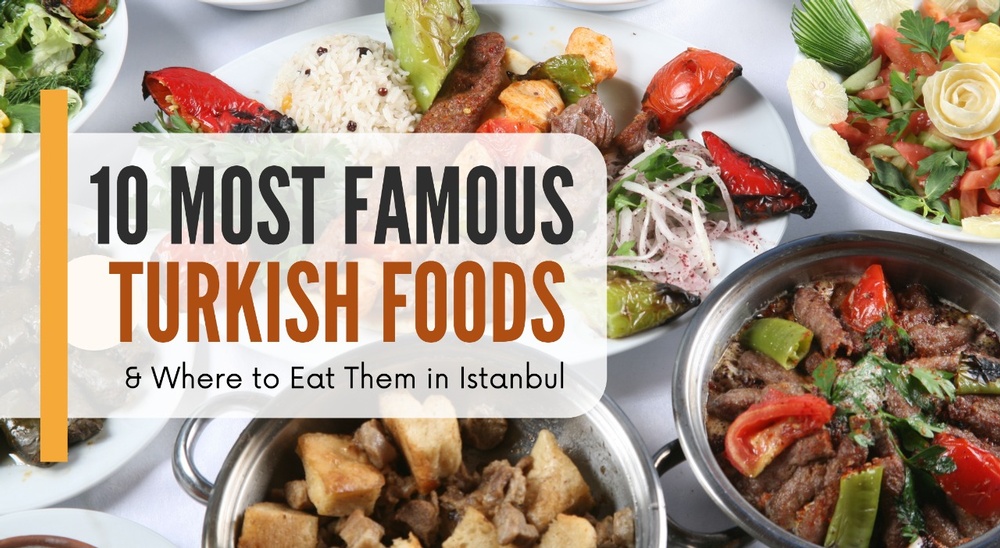 If it is said that Turkish cuisine is the tastiest and most famous food in the whole world, then it will not be wrong.

If you are in Istanbul and want to try Turkish restaurants but are having a hard time choosing. So, in this blog post, 10 most popular Turkish dishes have been mentioned, which will definitely be ordered again after trying them once. Turkish cuisine is a legacy of the Ottoman Empire. Therefore, a halal eater wants to try Turkish food. What is typical Turkish food? The menu of Turkish cuisine includes meat as well as vegetable dishes and the traditional vegetable dish SAKSUKA is made with eggplant, tomato, garlic, ginger, and spices. Apart from this, Zeytinyagli, artichokes, and green beans are also included. Turkish people mostly use castor oil in their food instead of mustard.

What is Turkish main dish? Dolma is a staple food in Turkey. Which is prepared from spinach and other vegetable leaves and spices. Its color is mostly green.

What is Turkish people favourite food? Kebab is a favorite dish of Turks. Almost 40 types of kebabs, which are prepared by mixing beef, lamb or minced meat, chicken and vegetables.

What is Turkish national drink? Raki, made from anise and grapes, is the famous national drink of Turkey. This cag kebab is prepared by cooking the meat in the oven. The best choice to eat it is to wrap it in lavas bread. Adding sumac, onion, and salad is best to make it more delicious. Try the sweet kadayif Dolmasi after eating spicy kebabs. Sehzade point is the best place to eat it because not only the food here is Turkish but also the style is Ottoman. From the owner to the chef. The best way to distinguish it among the types of kebabs is to choose a sandwich-like dish. Don't forget to try it in Turkish cuisine. This delicious dish is a product of the 19th century.

His name was Iskandar he discovered it. That is why it is called Iskandar Kebab. There is a hotel named after him even today in Istanbul. It is also known as "Iskenderoglu" which means the sons of Iskandar. The use of bulgur rice, tomatoes and curd enhances the taste of the kebab. This kebab, which is considered one of the favorite foods of Turkey, is among the favorite foods of the Ottoman period. If speaking of seafood, Balıkçı Kahraman is an internationally famous restaurant in Istanbul. The name of the most popular fish in marine aquariums comes. Grilling or frying fish is not a skill but frying a whole fish without cutting it is magic, also cook at the perfect temperature. If you are four people going to the beach, it would be best to come to this restaurant and order a kilo of fish. It will be enough to satisfy your hunger. A sprinkling of lemon is essential to add sourness to the fried fish. Finally, cranberry juice is enough to add color to the food. If we talk about ancient and traditional restaurants, the name Sultanahmet Köftecisi is on the top list. By the way, all the dishes of this restaurant are delicious, but the kofte are considered among the best dishes in the world. The spicy kofte served here is a must-try with the chutney. These kofte or also known as meatballs are prepared from tender thighs. If we talk about the sweet food of this restaurant, the semolina halva is worth mentioning. Kuru fasulye dish is made from white dry beans whose name is kuru. Which is one of the most famous Turkish foods. If you want to eat this excellent food, Erzincanlı Ali Baba Restaurant is the best choice in Istanbul. Eating there together with the Turks is no less than an honor. This restaurant was started in 1978 and there is so much rush here in the afternoon that it is a dream to taste food without being rushed. Among the most famous dishes here is the Adana Kebab, which is prepared on a skewer with the help of masala on coal. For dinner Raki and atom pudding that will make you go crazy. Buryan is a Turkish dish made by roasting lamb in the oven. It has been part of Ottoman cuisine for centuries. Here is the best Siirt Şeref Büryan restaurant in Istanbul to taste the best Buryan Kebab, which was founded in 1892. This delectable dish is softened by removing the bones from the meat, like a milk pudding or custard. Apart from Buryan, some of the delicious dishes of this restaurant include Bulgur, Burak (which is pastries), Hummus, and also many meat dishes and syrups. If life gives you the chance to go to Turkey, don't come back without eating Turkish home cooking. Çiya Sofrası, the most famous restaurant in Istanbul, offers you the best place to taste Turkish dishes. The food prepared here is prepared under the supervision of Chief Musa Dagdeviren. Popular dishes sold include Ezo Gelin soup (tamarind syrup) and minced meat. If we talk about dessert, kunafe is available with walnuts and with anjeel. You may have eaten meat, but trying this sandwich-like dish will be nothing less than a miracle. Because this dish is not made from goat meat but from rimbs. Strange thing to say! This is part of Turkish cuisine since 1968. Ozzie’s restaurant is the best place to eat it, besides meatballs, garlic meat, and roast beef is available here. You will definitely suffer from this pain if your friend orders the food instead of you. Beyti kebab started in the name of a famous person in nineteen eighty, who’s named Mr. Beyti. There is no better place to taste Istanbul's best kebabs than Beyti Restaurant. In this restaurant, kebabs, kofte, and a bottle of wine are also available.