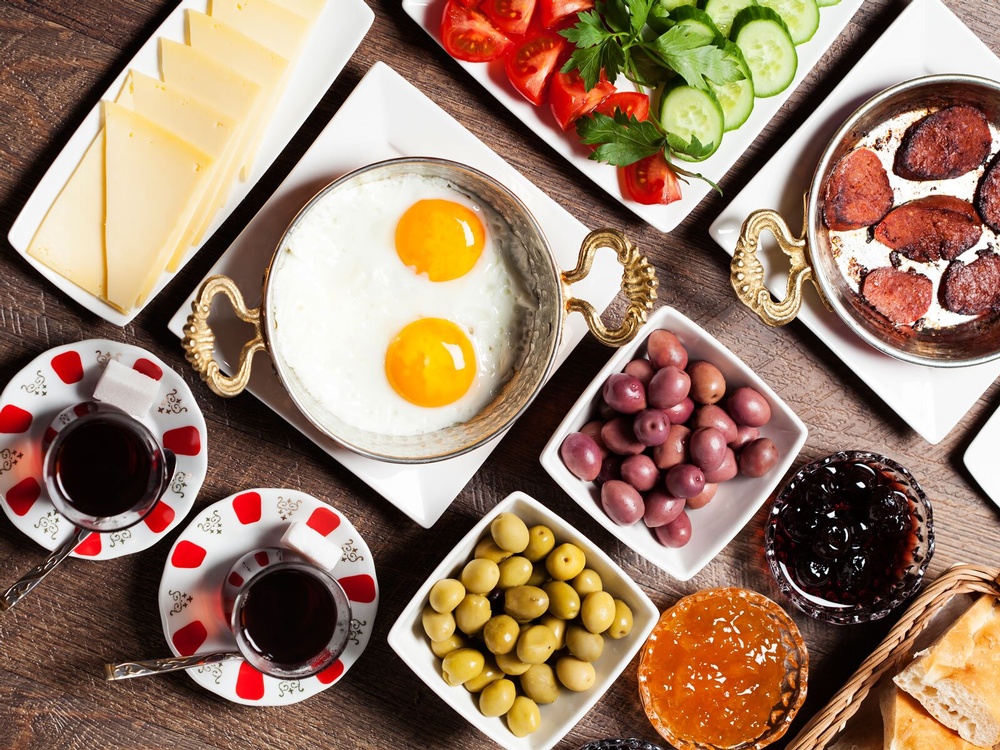 Cheese dates back as far as milk itself. The cheese serves a special role in Turkish cuisines, as well as in many other cuisines around the world. There is a broad consensus that cheese was invented in Mesopotamia, which means in Anatolia. The stage of cheese production determines its type.

The taste and the variety of cheese are determined by factors including the milk used in production, the protein and fat content, the bacteria in the milk, the factory conditions, the temperature and humidity levels, and the quality and the production techniques used for the additives.

As defined by Turkish Food Regulation, cheese is "a coagulated dairy product with a particular taste, aroma, and consistency, produced by cooking raw milk, UHT milk, or milk at 72 degrees for two minutes with cheese yeast or harmless acid, and later maturing." The first step in the process of turning milk into cheese is to coagulate it. There are two main programs available to achieve this.

The first is to leave the milk as is; this will cause it to go sour and coagulate. Second, add yeast to milk before letting it coagulate. In the process of coagulation, a liquid called whey is produced. During this process fresh cheese is produced. This cheese is placed in a maturing chamber for a period of time, and it is then processed into cheese by various methods.

About twenty varieties of cheese have been described in Turkish culinary culture; kasar, tulum, mihaliç, lor, and the most important white cheese.

In the West, white cheese, also known as Feta cheese, is produced predominantly in the Marmara region and consumed in abundance. A variety of techniques may be used according to the region of production, but sheep and cow milk can be used.

It takes 90 days for white cheese to mature in salt water. When it comes to white cheese, high fat content cheese is smooth and soft, while low fat cheese is harder. Turkish breakfast is incomplete without it. It is used in börek as well.

During the production of the Tulum cheese, the teleme is crushed, salted, and kept in a bag for a while. It contains no air pockets and is left to mature for at least three months. Lamb's milk and goat's milk are used to make tulum cheese.

It tends to be more expensive than other varieties of cheese since this yellowish cheese is produced mostly in northeastern Anatolia and the Aegean region. Although the tulum cheese of the Aegean Region is stored in salty water, its taste differs from that of all the other cheeses.

Kasar cheese is a brownish-yellow cheese prepared in cylindrical molds. Milk from lambs is generally used to make it. As a general rule, kasar products are produced in Middle Anatolian and Thrace regions of Turkey. At least ten kilograms of milk are required to produce one kilogram of Kasar cheese of good quality.

Teleme, after being placed in perforated buckets, is immersed in hot water at about 73 degrees for a few minutes before kneading and baking. A round container needs to be placed inside it for at least a month. Kasar cheese is great eaten on its own or with other dishes.

In order to make mihaliç cheese, teleme must be soaked in salted water and then cured. It is usually produced near Bursa and Balikesir. This recipe differs from kasar only owing to the fact that it is prepared over hot water at 40-45 degrees.

It has a thinner structure, less holes, and is harder than kasar. You can either eat it by itself or with foods requiring melted cheese.

Cheese Lor is made from whey left over from kasar making and mihaliç making. It is boiled to separate the coagulated matter, and the particles resulting from those process are broken up into tiny pieces.

Cheese spread including walnuts, tomato paste, and various condiments is often accompanied by any number of condiments, including Lor. Additionally, it is used for filling börek.

Aside from these major types of Turkish cheese, there are also many lesser-known types; for example, orange cheese (Eastern Anatolia) is produced by adding cumin, mint, and bay leaves to the white cheese and burying it underground for at least two months.

In Southeastern Anatolia, ÿrgü cheese (braided hair form) gets its name because it can be fried. Other varieties of cheese have their titles from their maturation containers: çömlek, küp, çanak, and testi.

Around Ayvalik you can find a cheese called Kirli Hanim that is made from white cheese filtered in reed baskets, salted and aged in cool conditions. A specialty cheese produced in Hatay region exclusively for using with the dessert Künefe and semolina sweets.

Kars Gravyeri, a type of cheese produced in Turkey that has holes and needs at least ten months to mature, is one of the most special types.

Geographical conditions give particular characteristics to the cheeses that exist outside the main varieties. Cheeses from inland regions are usually saltier and harder because of harsh winter conditions. Coastal regions, by contrast, prefer lighter types of cheeses.

Turkish breakfasts, social gatherings, business meetings, bargaining in the Grand Bazaar, or ferry rides crossing the Bosphorus would be impossible without tea. Serving tea on the streets, in shopping malls, and in parks where the tea servers shout, “CAY”! (chai). The beverage is always in shouting distance.

The Social Role of Tea in Turkey

Tea was traded on the Silk Road through Turkey in the 1500s, but it wasn't until nearly four centuries later that it became a part of daily life. Despite the health benefits of drinking tea, Mehmet Izzet, then governor of Adana, published the Çay Risalesi (Tea pamphlet) in 1878.

As tea houses started springing up in the Sultanahmet area of Istanbul, coffee was no longer the preferred hot beverage during this time. A single cup of Turkish coffee cost the same as four glasses of tea, so tea became an affordable alternative to coffee.

Turkish households drink an average of about 1,000 cups of tea a year, making it the country's highest tea consumption per capita. There are numerous accommodations for tea consumption in the coastal region of Eastern Black Sea, as well as social customs and traditions.

Turkey has a large number of tea houses and tea gardens in every town. There is no better place to exchange gossip and news than a tea house in smaller towns and rural areas. Young and old, as well as many foreigners, are welcomed in the tea houses in the larger cities and touristic regions.

Another place to indulge in tea drinking was the tea garden, which became popular in the 1950s, especially in Istanbul, and was the place for social gatherings for families. In contrast to a Japanese tea garden, a Turkish tea garden is very different in style.

Although the Japanese tea ceremony is quiet and serene, Turkish tea gardens are hubs of social activity and are visited by people of all ages, form students to businessmen to retirees to visitors from around the world.

Turkey is a country with many social events that revolve around tea. There is typically a samovar of tea and pastries for the bride and friends at the gelin hamami (bridal shower in the Turkish bath in the countryside).

This time of day is known as cay saati (tea time), for which there are more than ten books dedicated to the subject of sweet and savory pastries and light fare that are served at this time.

In Turkey, a double tea pot is used to prepare tea. It boils in the bottom (larger) pot and tea leaves are steeped in the top (smaller) pot. Every person can choose how strong or light they want their tea to be: strong and steeped, or a light tea with lots of water. The tea is prepared in a samovar in towns in central Anatolia, as well as in Eastern Turkey.

Turkish people prefer to drink tea out of small glasses in the shape of the tulip. More than 400 million of these glasses are sold in Turkey per year, equivalent to nearly six glasses per person. This shape isn't known to have originated, but the clear glass allows the drinker to see the tea's crimson colors.

Turkish tea glasses are used in recipes as measurements. There is nothing more awe-inspiring than hearing the clinking of tiny silver tea spoons in tea glasses as you pass tea gardens and tea houses.

Publicly served tea is typically accompanied by two sugar cubes. The kitlama tea custom has long been popular in Turkey, especially in Erzurum, where a piece of sugar is slid between the tongue and cheek. Often, Turks prefer lemon tea over tea with milk.

Tea cultivation in Turkey went seriously in 1917 in Rize, a town along the Black Sea in the eastern part of the country. Although Ankara was at war, Government-appointed agricultural engineers found it tough to gain the locals' support for their endeavor, which was crucial.

As part of a 1924 law, tea, oranges, and filberts were to be grown in Rize. The Government did not put much emphasis on cultivating tea until the mid-1930s. Thirty kilos of tea were harvested from 20 tons of seeds imported from Batum in the Georgian Republic in 1937.

The cultivation of tea became an integral part of Western Black Sea Coast economics to such a degree that towns began to take on the word "Çay" in their names: Mapavri became Çayeli, Kadahor became Çaykara. Turkey began exporting tea in 1965, after its production had met demand on the domestic market.

To coordinate the cultivation and processing of tea, Çay-Kur, the Directorate of Tea Establishments, was established in 1971. In 1973 it became operational. Tea cultivation was to be expanded, innovation in tea processing technology kept abreast, and tea imports and exports were to be made as needed.

In 1984, Çay-Kur gained control of the tea industry when private enterprises were allowed to process and package Turkish tea. The Çay-Kur tea company still commands 60% of the domestic tea market.

In terms of production, Turkey comes sixth in the world after India, China, Kenya, Sri Lanka, and Indonesia. The 'tea capital' of Turkey, Rize, is located on the eastern Black Sea Coast, and takes in a longer stretch of wilderness towards Trabzon. Nearly 300 tea plants are owned by over 200,000 families. They are also employed in tea factories or sharecroppers.

The camellia sinensis plant is used in making all teas, but the amount of fermentation is what distinguishes the tea as black, oolong (semi-fermented), or green (unfermented). The Turkish tea production process does not contain any chemical additives or substances.