Sucuk, a spicy beef sausage, is one of the most representative dishes of Turkish cuisine, which bridges the Middle East and the Mediterranean. Learn all about the meaty little sausage that packs a powerful punch of flavor - so you can spice up your culinary journeys. 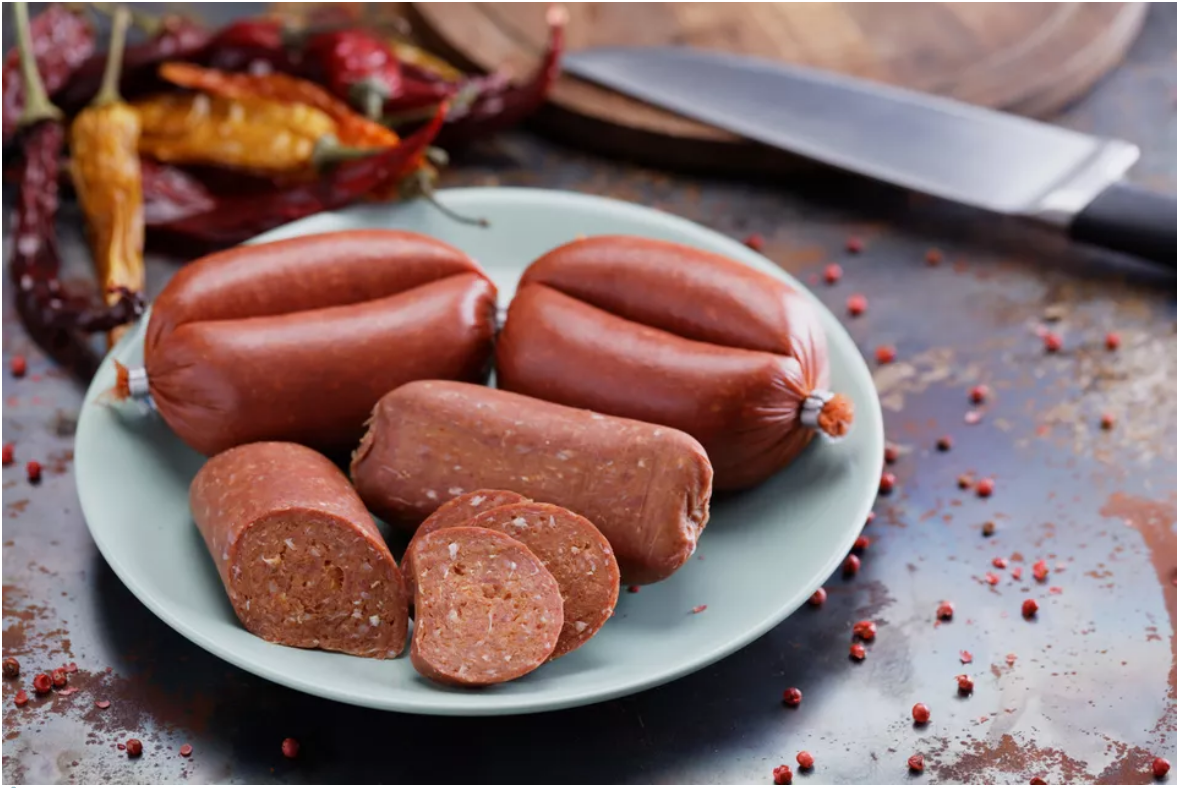 A Turkish national dish, sucuk is also spelled sujuk or soudjouk. East Europe, the Balkans, and the Middle East also have their own versions of it. Suxhuk in Albania, sudzhuk in Bulgaria and Russia, and soutzouki in Greece are typically used.

Sucuk is typically made with ground beef in Turkey. However, some butchers may choose to add lamb to the recipe. The horse meat in sucuk may also be found in Kazakhstan and Kyrgyzstan, further east. In Turkey, pork is not used because of its large Muslim population.

It's a beef sausage that's semi-dried and then dry-cured. A variety of spices are well-mixed with the ground meat, such as onion, garlic, cumin, sumac, and black pepper. After being piped into natural or plastic casings for several weeks, the mixture is dried.

This curing process alters the molecular structure and qualities of the meat by fermenting salt and spices. It also preserves the meat by changing the flavor and texture. With a high fat content, the sausages become firm and flavorful, making them ideal for cooking, especially for frying and grilling.

How to Cook Sucuk

You can enjoy sucuk with a traditional Turkish breakfast, which is a fantastic way to start your day. The sucuk is pan-fried without any added butter or oil and served with Turkish cheeses, fresh white bread, black olives, honey, and fruit preserves.

A popular breakfast dish is sucuk yumurta, which is served with eggs and this spicy sausage. Sahans, which are small copper skillets, are used to fry the sucuk slices. After the sausage has been crispy and released sufficient fat, the eggs are smashed on top. Typically, runny eggs are used for dipping crusts of bread in the mixture.

Taking the sucuk out of its casing allows you to make cubes for broiling or grilling, or make meatballs for kebabs. Sausages grilled on a sucuk grill are relatively low in fat and flavorful, as the fat drips away.

A traditional Turkish barbecue party often consists of guests gathered around a portable grill called a mangal, holding pieces of bread in their hands to take pieces of sizzling sucuk straight off the grill.

Also known as kuru fasulye, the dish consists of navy beans and tomato but uses sucuk as its main ingredient. The dish is also extremely popular as street food in Istanbul and other moderately sized cities in Turkey: Watch for food trucks serving sucuk sandwiches that are served on sliced onions and tomatoes on toasted bread, crisped on the griddle.

How Does it Taste?

This crumbled aged beef is higher in spices than American beef, and it is soaked in fat without floundering about, as if it were fried but well drained, leaving crispy, delicious cubes of cured meat.

Though nothing quite compares to sucuk, Mexican chorizo may come close in terms of taste. Both are flavored with spice and have a dense fatty consistency. Their respective cuisines make both products widely available for use. Both scores highly on the heat-spice meter and both are often served with eggs.

There are two main types of sucuk: those that are packaged and marketed or those that are made in a butcher shop. However, there is a tremendous range of variations in each of these two categories.

The meat sourced and amount of seasoning and curing time vary greatly within the butcher-made category, as does whether lamb is added to the meat. Each butcher has their own, typically secret, recipe for preparing sucuk.

In general, sucuk is spicy, but the heat level varies from barely perceptible to intense enough to bring tears to your eyes.

Large commercial producers are subject to many of the same considerations, except that their output is much more consistent - once it is in production, there is little variation. There is, however, important stylistic variation within this category.

Despite some commercial producers' attempts to produce a traditional-style version, others use heat treatment and additives to reduce the fat content of the traditional product to appeal to the maximum number of consumers.

Even without a recipe, it is possible to make some Turkish classic dishes that utilize sucuk: Cut some thick slices of sucuk and crisp them on both sides, then crack a few eggs and cover for a few minutes, then serve.

As an alternative, you can cook the meat by rolling it into little balls, then gently pressing on it with a spatula in a skillet. Put one half of the hero-type roll on the sucuk, then flip it until crispy on both sides. Use your other half of the roll to soak up the juices. On top of the sucuk, sprinkle thinly sliced onions and tomatoes, then top with the soaked bread.

Turkey has a wide range of grocery stores and butcher shops that sell sucuk. It is also available in the Middle East and Greece groceries or butcher shops. Additionally, it can be found on websites selling Turkish and Middle Eastern foods.

The original airtight packaging of sucuk allows it to freeze quite well and last for quite some time. Once you open the package, it can be kept in a tightly sealed plastic bag in the fridge for about five days.

Whether sucuk can be stored for a long period of time depends on how much salt is used to season it and how much time it is allowed to dry.

The process of finely chopping, heavily seasoning, and drying meat likely originated as a means of preserving it. If purchasing packaged meat, check the expiration date; if purchasing fresh, ask the butcher how long it will keep without freezing.